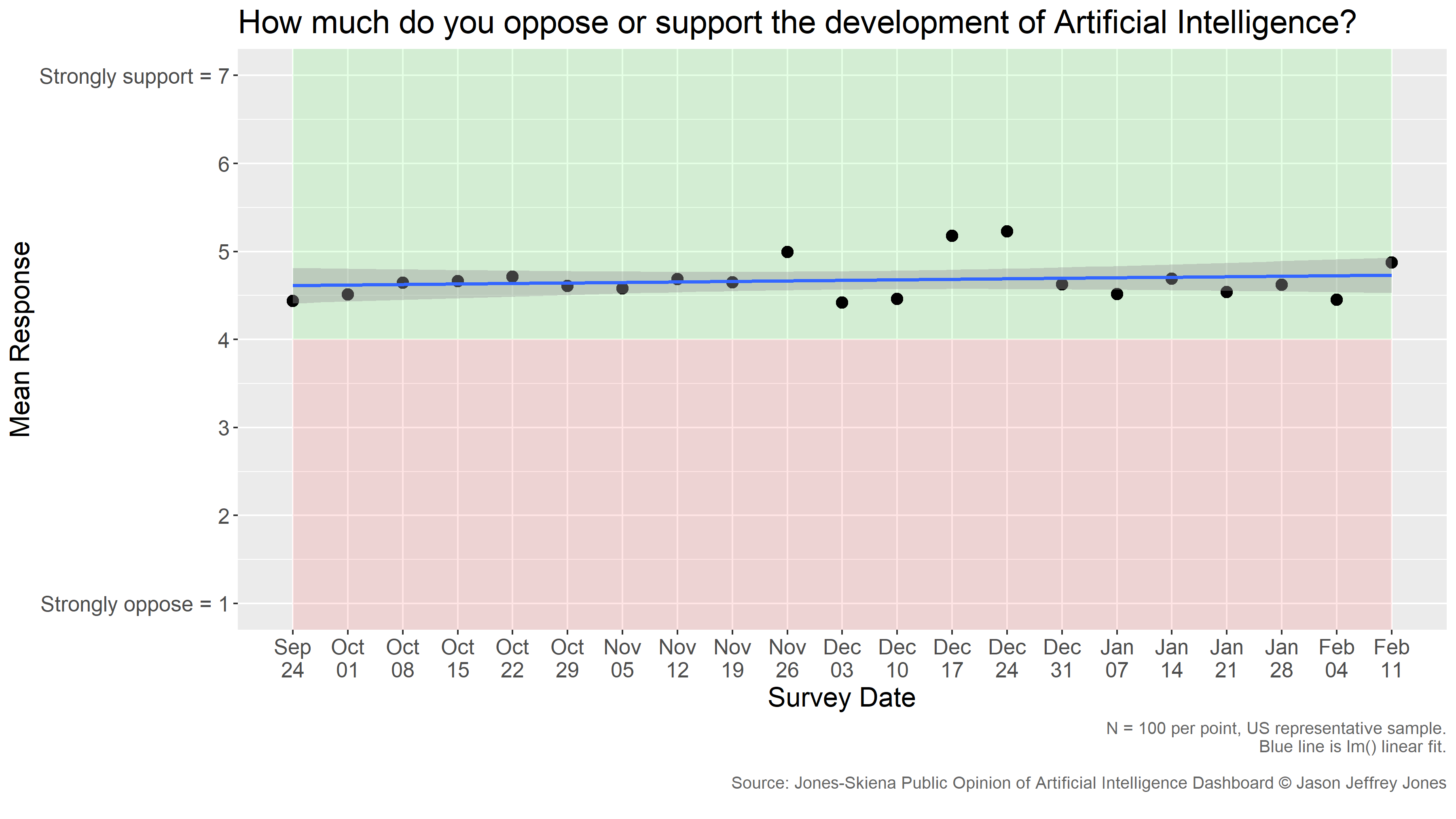 On average, the American public supports the development of Artificial Intelligence. In the data from February 11, 2021, the estimated mean response is 4.88, with a 95% confidence interval of 4.56-5.19. On our 7-point scale (labeled "Strongly oppose" at one end and "Strongly support" at the other) a value of 4 indicates indifference, any value below that opposition and any point above support.

In 21 weeks of running the same survey item, we have never observed a mean estimate below the midpoint of the scale. However, it is useful to observe the raw frequency of responses as a set of histograms. One can see that the modal (most frequent) response is typically 4, the midpoint of the scale, which we interpret as indifference. Americans are generally neutral on this question, but among those who are not, there are more on the Support end of the scale than the Oppose end. One can reasonably question whether the observed modal indifference is a stable equilibrium. We imagine that it is not, and public support will shift in one direction or another as more Americans gain more experience with and knowledge of artificial intelligence. However, we have been expecting that for awhile now, only to be met by brutal sameness week after week.

We had wondered what short-term effect the 2021 storming of the United States Capitol (which occurred Jan 6) would have on our data series. We made the prediction that the destabilizing nature of the event would lead to the response distribution shifting to the left (i.e. lower values) for measures like this one - which asks about "support" for a presumed status quo. Six datapoints post-event in this series, we do not observe dramatic change. The Jan 7, 2021 estimate was low, but not exceptionally low. Jan 6th does not appear as a pivot or inflection point in the series. 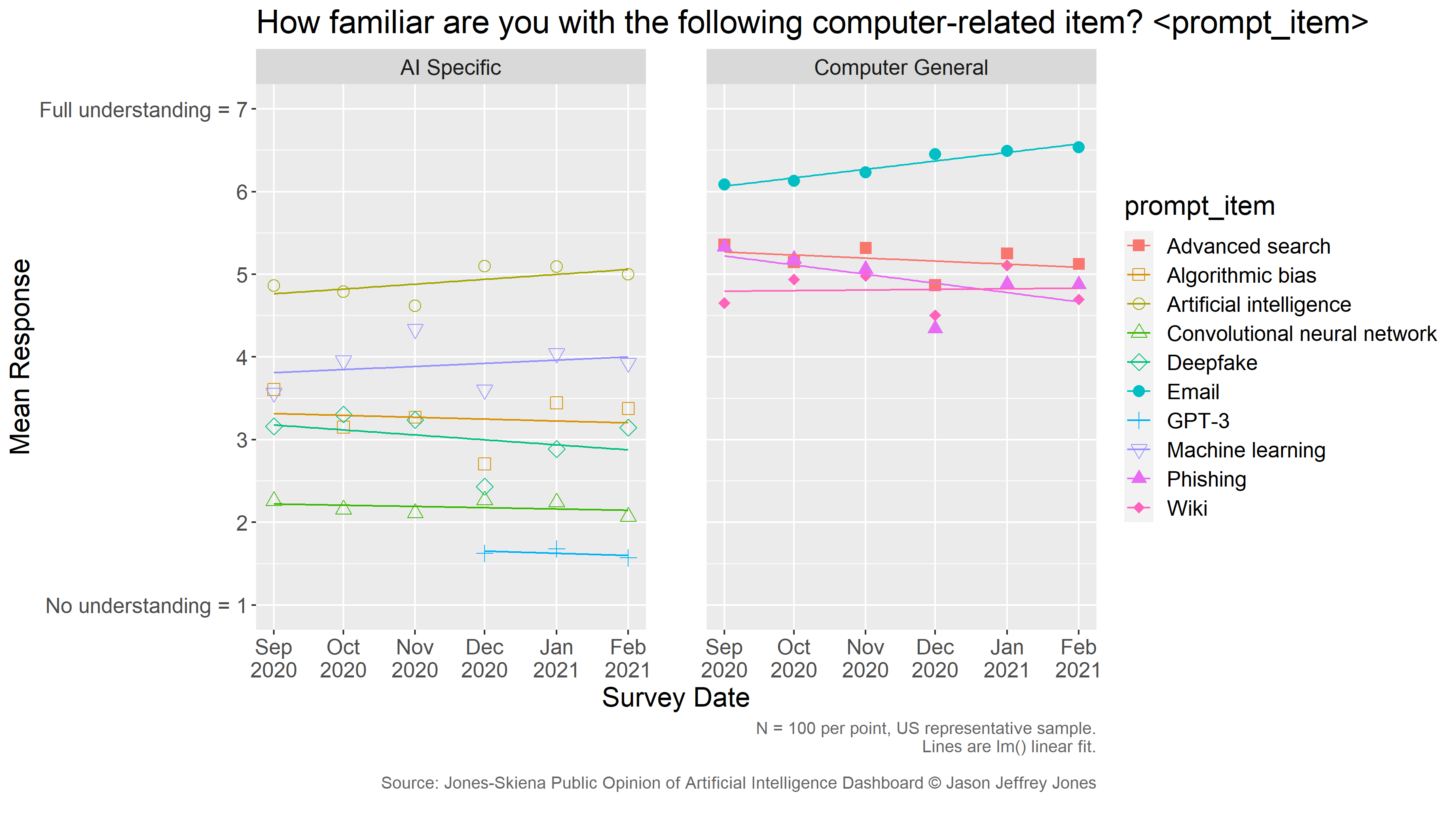 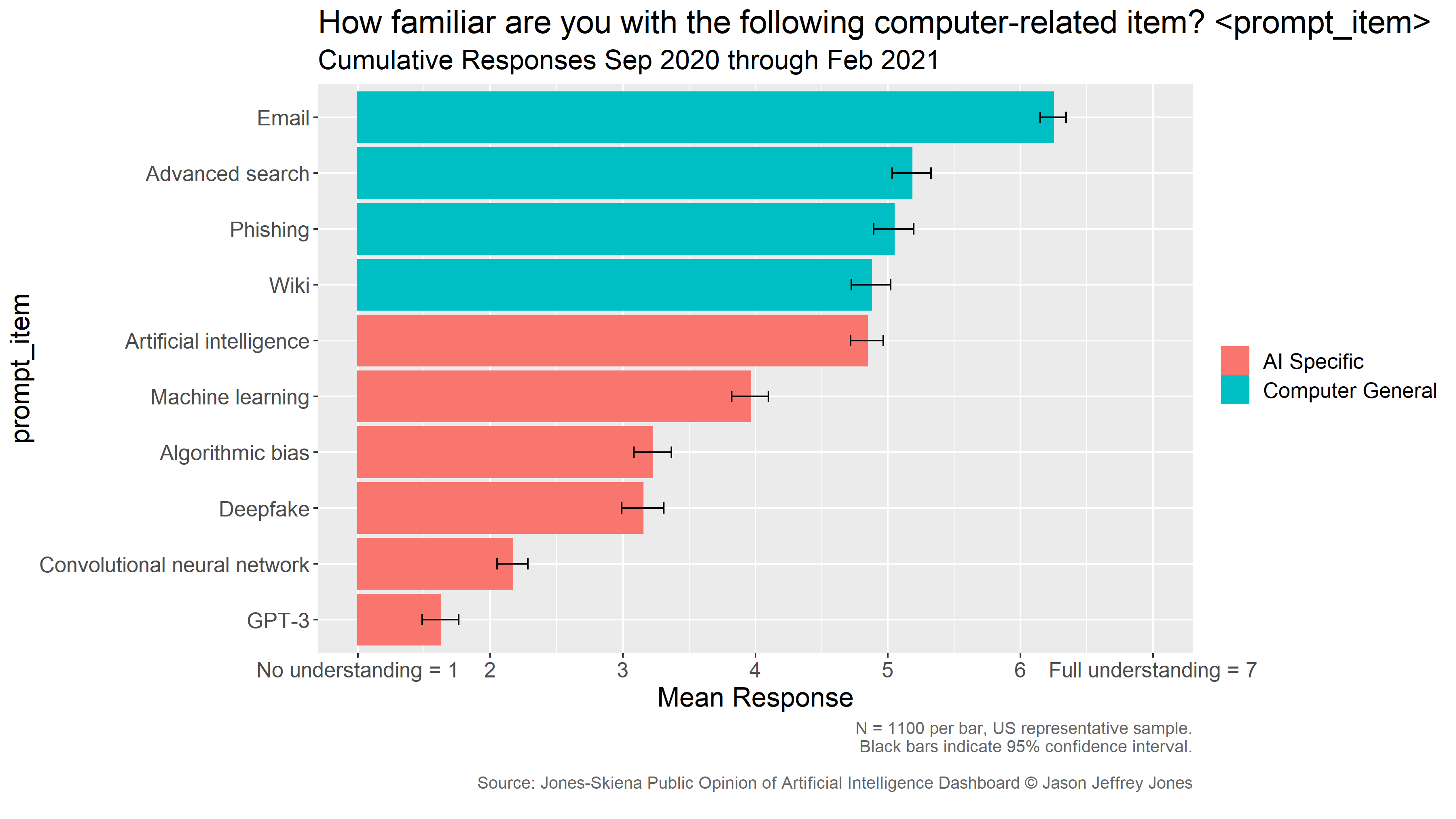 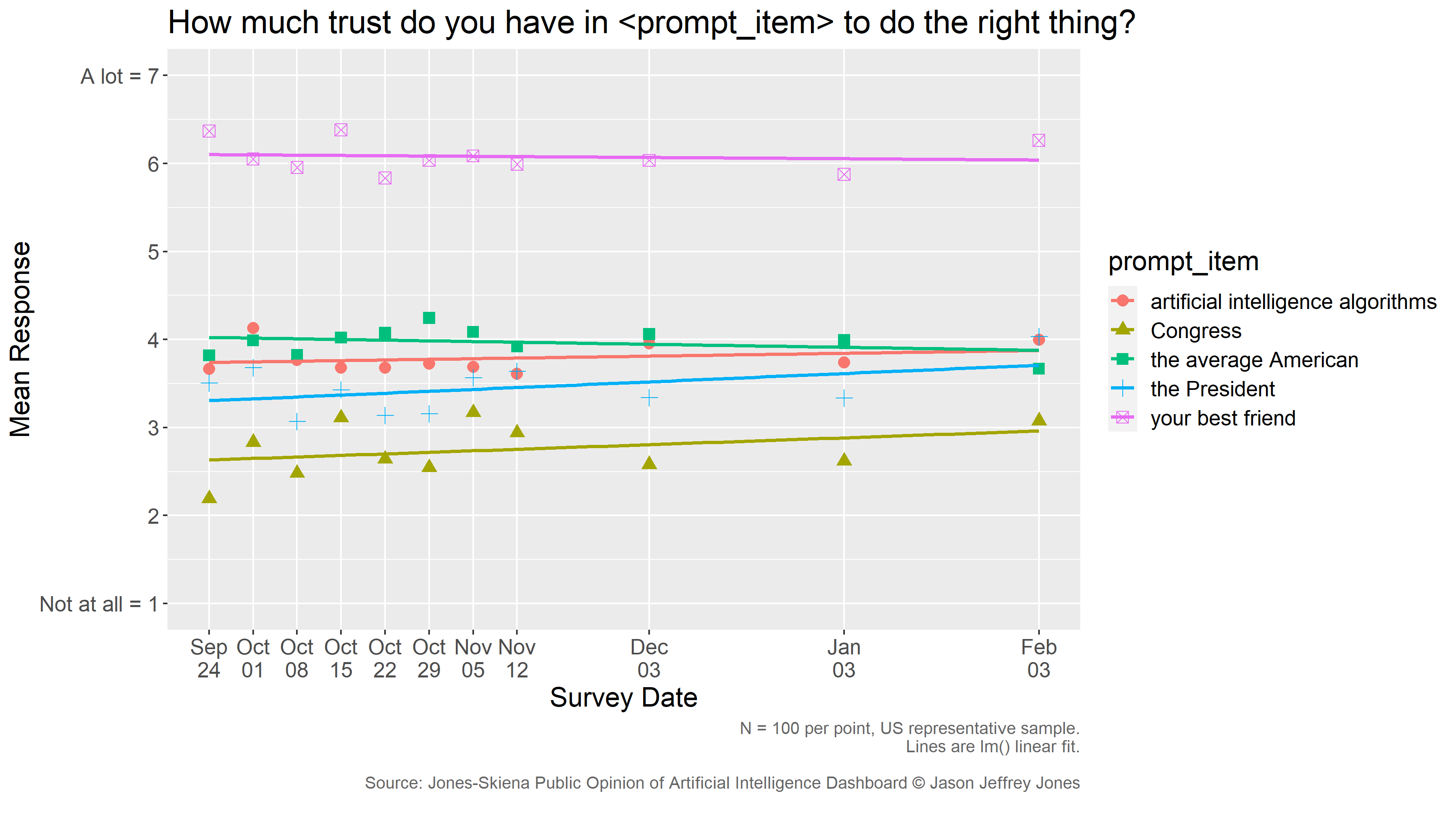 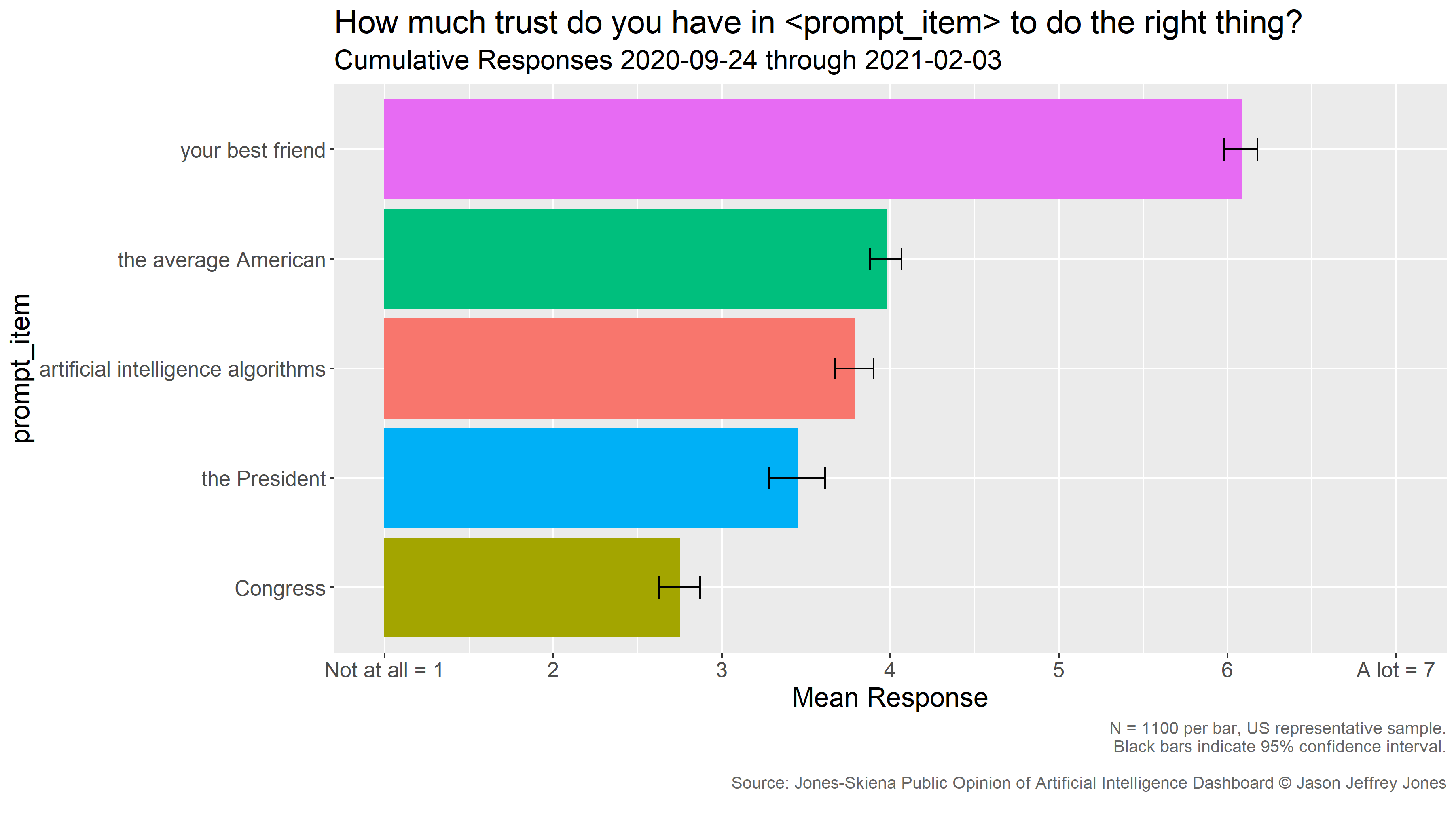 * A lot has happened in Washington, D.C. since the inception of our survey. This round of "trust" items is the first collected after the 2021 storming of the United States Capitol (which occurred Jan 6). A new Congress has been sworn in. A new President has been inaugurated. Respondents granted the new President and Congress some of the highest levels of trust we have seen, and time will tell whether an upward reset or trend holds. The convergence of the trendlines for "the Average American" and "artificial intelligence algorithms" is also interesting to observe. 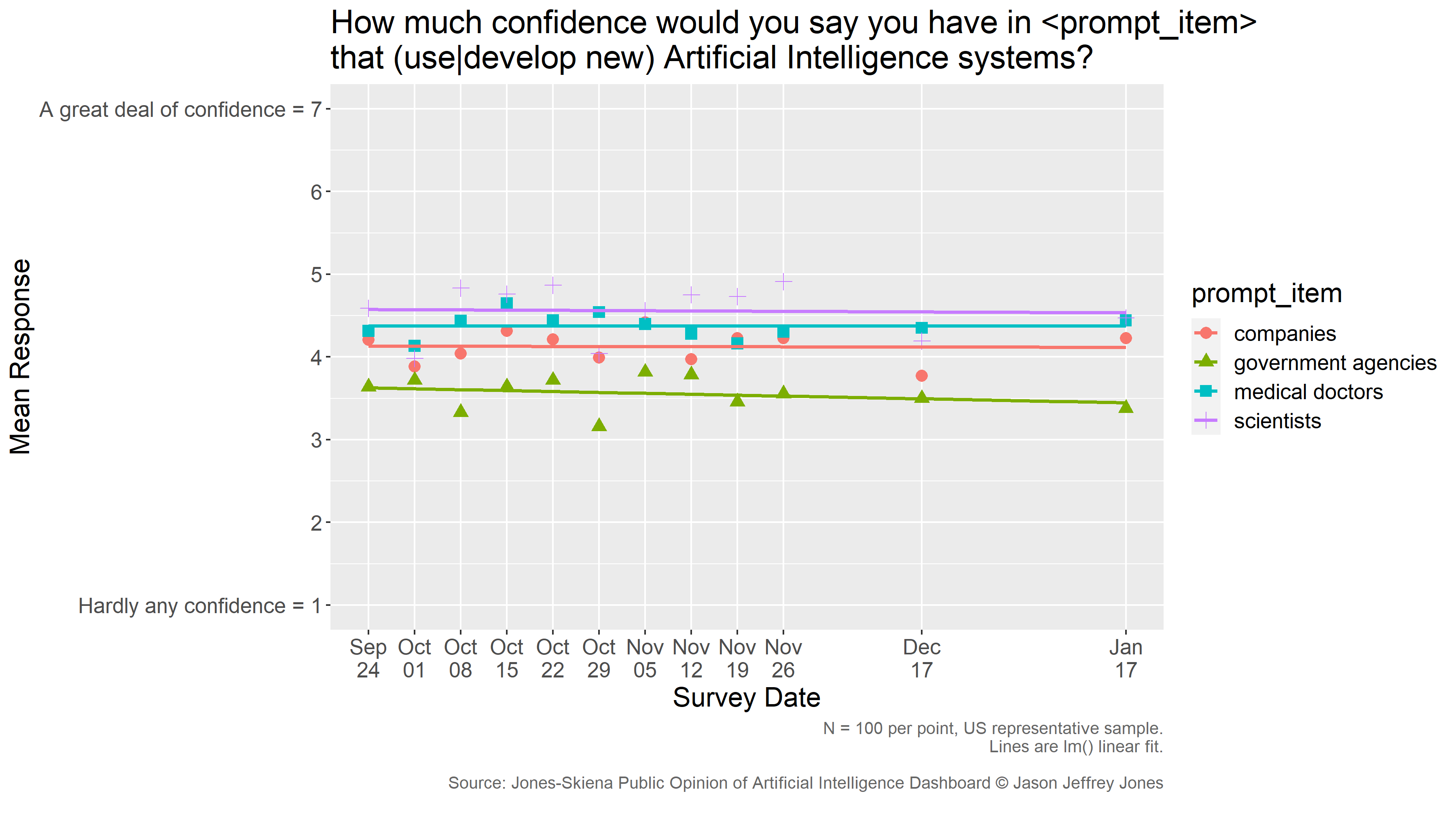 In our early data (Sep-Nov 2020), scientists that develop new Artificial Intelligence systems appeared to consistently elicit more confidence than other items. The series also indicated it might be increasing (weak positive slope). However, with the most recent two rounds of data, confidence in AI scientists has slumped back toward the pack. No item appears to be steadily gaining or losing confidence. Trendlines are shown to aid the eye, but none has a slope significantly different from zero. 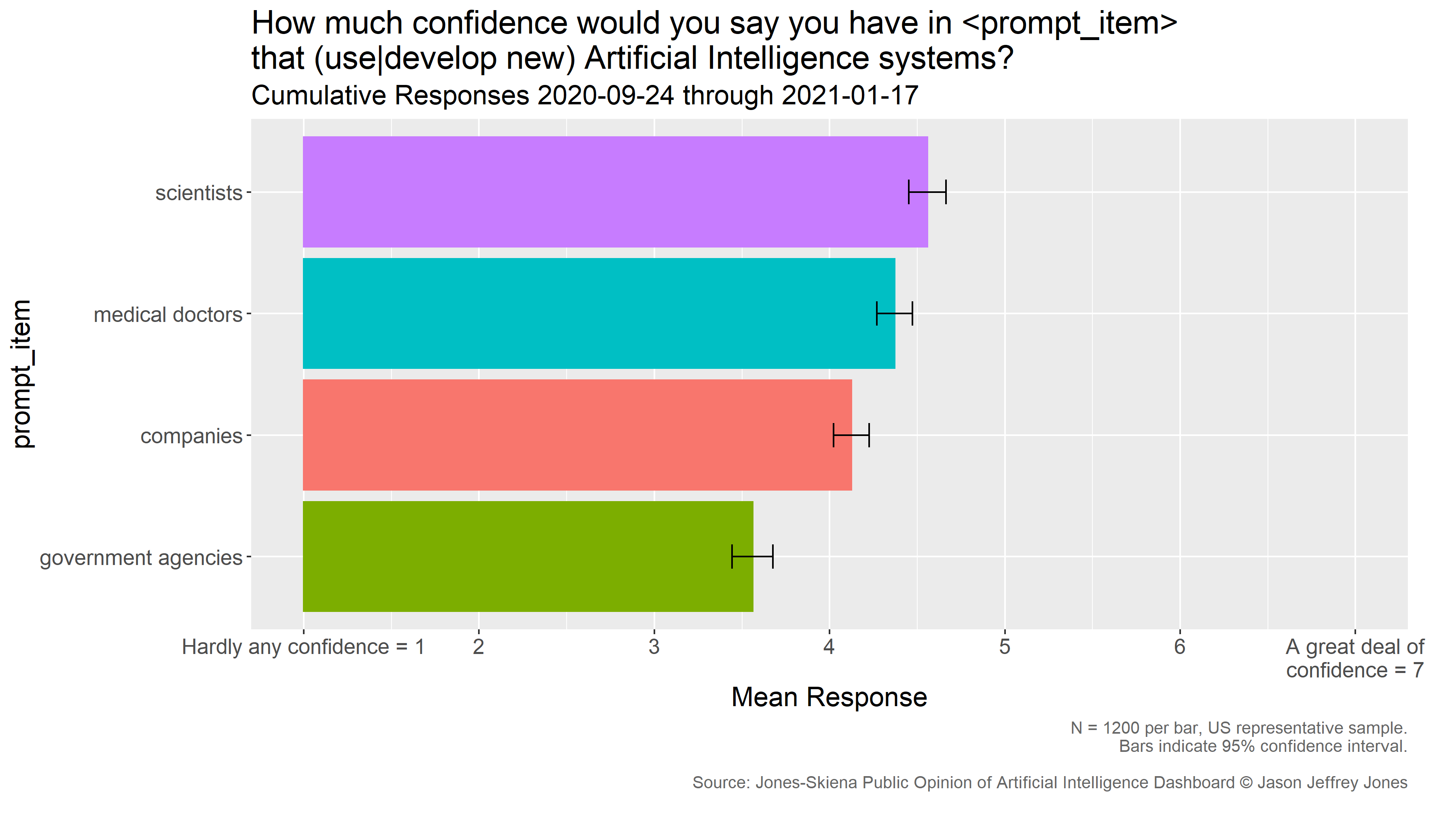