A brief description of JJJIT-V1 and the Identity Resolution Revolution.

This website lets you explore how Americans are describing themselves online. Search for a word, and you will see the prevalence of American Twitter users who chose to include that word in their profile "bio." And you'll see the trend over time from 2015-2020. You can compare up to 10 words at a time.

I wish to study the choices people make when describing themselves with words. Let’s call the output of this act: personally expressed identity. It is personal – the individual is describing themselves. It is expressed – these are words the individual emits, where others might see them. And it describes identity – we are concerned with text whose explicit purpose is description of the author.

LOPS stands for longitudinal online profile sampling. Online profiles such as one finds on Facebook, Twitter and other social media contain a wealth of self-provided information about individuals. For our purposes, we are interested in short text self-descriptions, which we will call the bio. See former President Barack Obama’s bio circled in red. Bios are the most available source of data about personally expressed identity.

To perform LOPS, one samples bios from online profiles as often as possible. For example, one might take a snapshot of each tweet from one user, including the user’s profile at the time. This allows a series of time-stamped self-descriptions to be assembled to form a longitudinal picture of that user’s personally expressed identity. From such series, compiled for many users (multiple millions of US Twitter users as one example) one can draw inferences about temporal trends in aggregate identity. 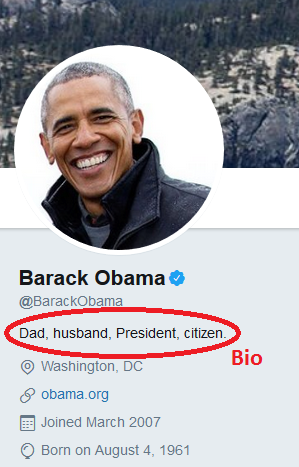 This web tool is named Jason J. Jones Identity Trends V1. I built it to give anyone who can use a web form access to trend data I have computed using LOPS. I was inspired by Google Trends and its use in both formal and informal research. With more funding, I could expand the functionality, but for now, with zero budget, this is what I can do. It's V1 - version 1.0.

I encourage you to do more with the data. You can download the data for many thousands of tokens from my Open Science project named Annual Prevalence of American Twitter Users with specified Token in their Profile Bio - 2015-2020 Data. If you are interested in collaborating, contact me.

The ultimate goal of this work is a scientific revolution in the study of identity. My aim with LOPS is vastly increased precision when estimating the prevalence of any given identity. Additionally, due to the time-stamped nature of the bio sampling, the temporal resolution is absurdly high. (We could study identity change at millisecond resolution if we were so inclined.) One can glean some idea of users' geographical location from the same data. There are nearly limitless combinations of geography, time and aspects of identity to be examined, and we have just begun our work. Collectively, I refer to the new world of analysis the LOPS method makes possible the Identity Resolution Revolution.