Last year for International Pronouns Day, I created a visualization depicting the increasing frequency of preferred pronouns lists within profile bios in a longitudinal sample of 1.35 million US Twitter users.

This year, I did something slightly different. I focused on visibility instead. I estimated the visibility of preferred pronouns in cross-sectional samples of US users - specifically those who were active each day 2017-2022. 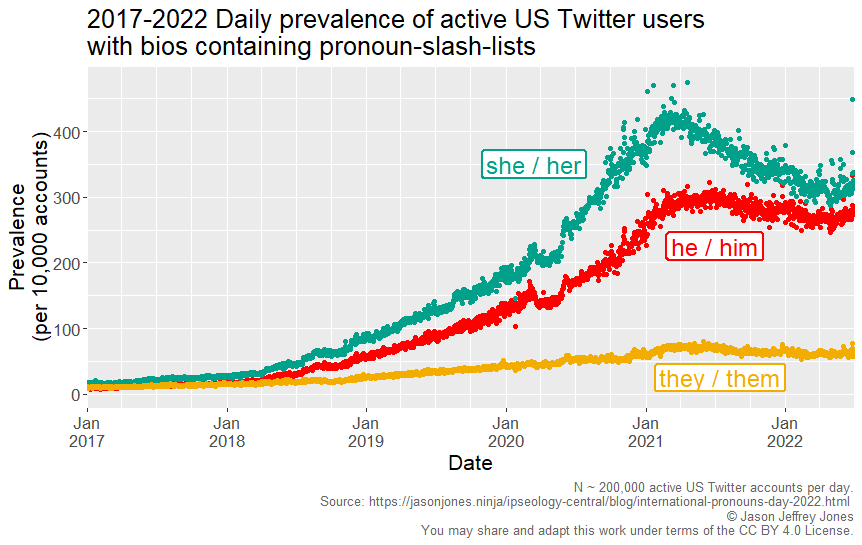 What does it mean?

On each day, say you looked at 10,000 tweets (chosen randomly from all tweets tweeted that day). The numbers in the graph above tell you how many authors of those tweets have she/her, he/him, or they/them in the text of their profile bio. In all three series, the numbers have increased from where they began.

I call these measures of visibility because the numbers represent something different than merely the presence of pronoun lists in bios. The value also depends upon the user being active (tweeting) and thus visible in others' timelines. Read this open-access, peer-reviewed article for more on the complementary strengths of cross-sectional and longitudinal analysis.

You probably noticed something happening in June 2022 in the first figure. I've labelled what I think is the cause on the graph below. 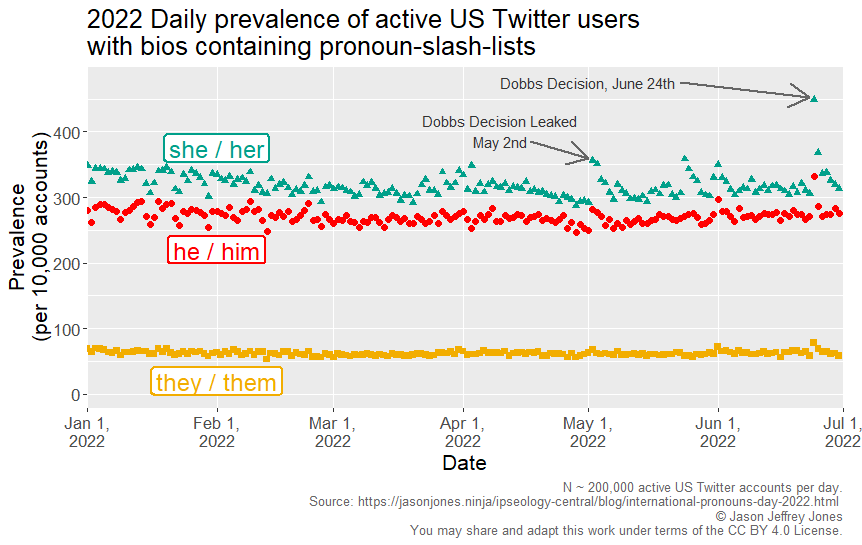 On the date that the Dobbs US Supreme Court decision was first leaked and again on the day it was released, users with pronoun lists in their bios were unusually active (and therefore visible).

This work extends work done by Liam Tucker. Liam is an amazing student currently majoring in Computer Science at The University of Alabama. This past summer, Liam investigated the prevalence, correlated language and social clustering of pronouns within profile bios as an REU in the Computational Social Science of Emerging Realities Group. One point that repeatedly came up in Liam's results was that US Twitter users with pronoun lists in their bios seemed to be particulary interested in politics. The results here corroborate that finding. We are currently collaborating on a manuscript to share these results.

I think temporal trends in personally expressed identity are interesting, and I show these data here in case others do, too.

When I show people data like that above, they sometimes ask, "What other words are changing?" The best answer to that question is a long list of links, so here it is: